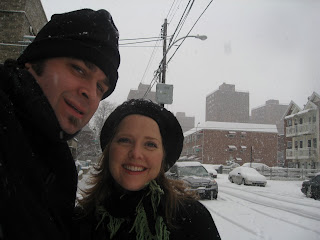 Sorry for the delay on the blog, we’ve been on the road since February 14th and had little time to update. We will continue our series on why the arts are important after a brief update on our trip to the Big Apple. The day after we arrived it snowed a few inches. It was wonderful to be back in the city and to see it in winter. It was a true test for Sarah as she had never been there in the winter time so it gave her a taste of times to come.

Several highlights were the IAM conference, which we will give a more thorough update later, and a moment we shared with our illustrator friend John Hendrix. I met John when he as a Masters student in Illustration at the School of Visual Arts. He became a fast friend and someone who was willing to mentor some of our students while he and his wife Andrea lived in NYC. John has become a noted illustrator over the years and has received wide acclaim for his drawings. You may have seen some of his work and not known it as he has drawn stuff for Sports Illustrated, Entertainment Weekly, Rolling Stone, The New Yorker, etc. (please go see his web page, he’s got skills http://www.johnhendrix.com)

Recently he did a job for the NBA that has become larger than he had expected. Sarah and I were honored to have been with John this past week when he saw one of the NBA illustrations in all its glory…here’s what happen…WE LOVE YOU JOHN!!!