The coming of the Conceptual Age… 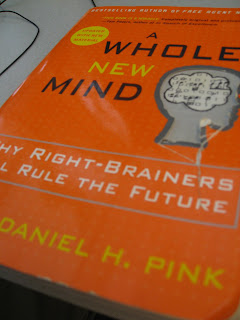 This is our first of several installments to enhance the points we make in our newsletters starting in January. If you are interested in receiving our newsletters, please send us an email: birdandkey@gmail.com. We’d be glad to send you one.

Are we moving from the Information to the Conceptual/Creative Age? Daniel Pink thinks so. His book A Whole New Mind was released in 2005 and has received a lot of interest in our arts circles in , and even within Campus Crusade for Christ.

His premise is that the needs to change the way it does things in the world’s economy as this new Conceptual Age emerges. Pink posits that in the past – in the midst of the Information Age – more “left-brained” type jobs were needed, jobs that required analytical, sequential, and linear thinking.

Pink writes that there are three things causing this shift away from “left-brained” dominance—abundance, , and automation. 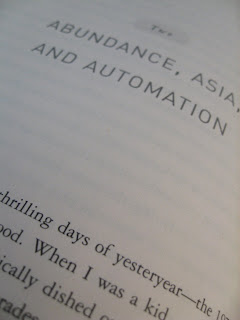 When I (Kirk) first read this, I was quite depressed…still am…we are a nation of abundance. And its this abundance that is creating a “glut” of sorts in our culture, a “glut” that Pink says needs creative minds to turn the abundance into something useful and beautiful.

Asia: In , both east and south, Pink quotes:

[Computer] programmers and their counterparts throughout , the , and are scaring the bejeezers out of software engineers and other left-brain professionals in North America and , triggering protests, boycotts, and plenty of political posturing. The computer programming they do, while not the most sophisticated that multinational companies need, is the sort of work that until recently was done almost exclusively in the United States – and provided comfortable white-collar salaries of upward of $70,000 a year. Now twenty-five-year-old Indians are doing it – just as well, if not better; just as fast, if not faster – for the wages of a Taco Bell counter jockey. Yet, their pay, while paltry by Western standards, is roughly twenty-five times what the typical Indian earns – and affords them an upper-middle-class lifestyle with vacations and their own apartment. (A Whole New Mind p.37What the West, particularly the needs is to be creative…conceptual…and make new jobs with creativity—right-brain thinking—at the heart of these new jobs.

Automation: “Last century, machines proved they could replace human backs. This century, new technologies are proving they can replace human left-brains.” (A Whole New Mind p.44). Doctors are utilizing computers to assist in diagnosis. The legal profession is offering services online. And we can even do our taxes as fast as a “Turbo” engine, cutting out the need for accountants.

It becomes apparent that we’ll need some creative thinking to help us make new jobs, jobs that computers are replacing.

We won’t go into the rest of Pink’s book, you’ll have to read it yourself, but you may be asking what this has to do with what Sarah and I want to do in ?

If we are in fact heading toward a creative/conceptual age, then the church has an opportunity to cultivate these creative and conceptual…right-brained – minds. What better place to find those minds than in the art world of ? Perhaps they could be found in the arts circles of your communities as well?