I had always thought I’d get to the top of them…but it could wait, after all they would always be there.

The morning started like it normally did for me – reluctant to leave sleep but looking forward to seeing the students. Knowing that I was meeting Paul to collect materials to hand out at Pace University resonated in my mind as I slipped on my shoes and made my way to the subway.

The books, music CDs, info postcards, and special toys were all safely deposited in a self-storage building west of Times Square. Our plan was to meet at the storage, load everything we needed in a taxi and take it down to Pace located three blocks from the World Trade Center. We would hand these materials out to incoming and returning students as we did every year before looking for ways to help students during their years in college…and to remind them also that there is a Jewish carpenter who loved them. So Paul and I met at 9AM.

The first sign for me of anything unusual that morning was the sound of emergency vehicles echoing off the buildings. Normally there isn’t anything strange about this sound in Manhattan, after all there are a lot of people with needs in the City. But what was strange was seeing eleven vehicles pass hurriedly down 11th Ave, a brief red blur. I remember making a remark like, “Must be something big” or “You don’t see that everyday” to a fellow pedestrian as we both paused to watch the passing vehicles taking the firemen downtown…some for the final time.

“A plane flew into one of the Trade Center towers,” was the reply I got from my brief friend, a fellow pedestrian walking beside me. My initial thought was “Seems like a lot of fire trucks for a small plane” and I walked into the storage center – such a ridiculous thought now, but not at that moment.

Images of old footage of the aftermath of the B-25 bomber that flew into the Empire State Building at the end of World War II entered my mind as Paul and I grabbed a cart and took the elevator to the 4th floor. Fog was blamed for that accident in 1945 but this September day, as all remember, was crisp and clear.

When Paul and I arrived at our small storage space we began the process of sorting the materials and stacking the desired items onto our cart. I remember being frustrated with the time it was taking to collect a small amount of materials – I think we ended up loading and unloading that cart a half dozen times. When we finally finished we took the cart down the elevator and I waited on the loading platform while Paul went to hail a cab – there was little thought in my mind of that “small” plane that went into one of the Trade Center towers.

That changed when Paul came back 45 minutes later, cabless – that’s too long to not hail a cab on a beautiful, clear Fall day in Manhattan. He said that the authorities weren’t letting any cabs below 14th Street. That small plane I had in mind? It got much bigger.

We decided we’d head back to our offices in the basement of the Empire State Building and determine from there what to do. So after heading back upstairs and “RE-storing” what we had not taken, we grabbed a crosstown bus on 42nd Street to take a subway from Times Square. As we approached the Square the “small plane” that became a “much larger plane” exploded into a serious international incident when I read this line march across the Times Square ticker:

When we exited the bus and went down the stairs to the subway we walked up to the subway booth attendant who said in exasperation, “I have no idea WHAT is running and what ISN’T running, but if I were you I would not go in there.” I was on foot most of the rest of the day. From that point on the whole day took on an “apocalyptic movie” tone.

Paul and I decided to walk to the Empire State Building to see if our friends and teammates were still there or had at least evacuated. Walking down Broadway I wondered if all the activity around me was some sort of movie shoot. There were people gathered around cars, doors open, with radios blaring the local news channel. People gathered in front of “Mom and Pop” electronics stores watching the TVs as they broadcast the immediate scene happening downtown. People were on cell phones yelling to be heard over the antagonized buzz of the moment. People lined up at pay phones waiting their turn to call friends or loved ones because cell phone availability was sporadic. It was surreal, it was unusual – sadly historic.

As we passed one of the cars emanating the blaring news – I think it was a cab – I overheard the words “the tower had collapsed” in the din of noise. The severity of the moment punched my heart and I turned to Paul and said, “We need to pray.” So there we were two friends in Manhattan with little knowledge of what had just occurred a mere three miles away praying out loud for the people at the Trade Center, the City, and the Nation as we made our way down the crowded sidewalks of Broadway.

At the Empire State Building we were relieved to hear that everyone had been evacuated. But lacking information we decided to head to Paul’s place on 13th Street because my place, even though closer lacked a TV. Our prayers for the City and Country continued as we walked to 13th Street still wondering yet dreading the true depth and breadth of what had just occurred. We rushed to the roof of Paul’s building to look down 6th Avenue to see what was there.

It was an astonishing thing expecting the two monolithic buildings to be there, but instead to see merely smoke and ash left me speechless.I still wondered when the movie was going to be over. We returned to the roof several more times that day with still the same sense of disbelief – was this just a nightmare?

The other thing that hit me was the stench. It’s hard to describe, not the natural smells of wood burning but an almost burnt manufactured smell. It lingered for weeks afterwards especially when the wind shifted from north to south – something I won’t forget.

From our vantage point most pedestrians were walking north, it seemed only emergency vehicles were on the roads moving both up and down town, sirens blaring.

We watched on the TV what all Americans pretty much saw, and are different for it. I attempted to make calls to my parents and friends throughout that day with no success. I wouldn’t be able to reach anyone until later that night.

Two other things strike me about that day, one was around lunch time. Paul and I ventured out to see if we could find food. When we exited his building there was a line of people across the street that extended around the corner and down the block. At first I was a cynical New Yorker and thought people were in line to get food from the supermarket around the corner but when we walked by that corner I noticed that the line went past the supermarket and around the next corner. Apparently, it was a line of people who wanted to give blood at the local hospital, St Vincent’s, for any victims in need. I knew in my heart we were going to be alright from that moment, to see that line and New Yorkers wanting to pitch in and help reminded me that even in the midst of something so dark God’s generous spirit can move anyone.

The other moment I remember that was so poignant was later that afternoon. I didn’t even make an attempt to take the subway knowing they might not be running so I walked. It was about 5 o’clock, the time that is supposed to be the height of rush hour the streets full of life – and there was no one, no one at all. Just another strange moment in a surreal day.

My day ended when a friend of mine asked me if I would come up and sleep on her couch because she didn’t want to be alone in her apartment that night. In the days after September 11th all New Yorkers felt closer – or at least the desire to be closer.

In the ten years that have passed since that day I can honestly say I have become more emotional about the tragedy. I think the “surrealness” of it all created a sense of detachment on the 11th. Since that day we have had time to hear and reflect on all the stories, both tragic and heroic, and allow them to touch the part of our humanity that Lincoln called the “better angels” of ourselves.

The things that I continue to reflect to this day are:

·The moment I saw the emergency vehicles pass – how many of those firefighters lost their lives?

·How Paul and I took so long to get our materials almost as if we were being delayed – a similar story heard from others in the days, weeks and even now years later.

·Walking down the busiest street in Manhattan, Broadway, the noise and mayhem surrounding us praying out loud to God for mercy and strength for the city and the nation.

·The line to give blood.

·The smell when the wind shifted.

·The desire for community in the days after. 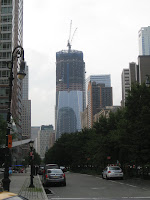 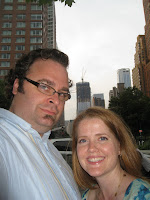