Was in Systematic Theology class today and my professor shared this extended quote on the nature of Christ as both 100% God and 100% man. It’s a good quote and wanted to share it with you: 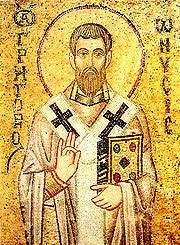 “He was tempted as man, but he conquered as God; yea, he bids us be of good cheer, for he has overcome the world. He hungered—but he fed thousands; yea, he is the bread that gives life, and that is of heaven. He thirsted—but he cried, ‘If any man thirst, let him come unto me and drink.’ Yea, he promised that fountains should flow from them that believe. He was wearied, but he is the rest of them that are weary and heavy-laden. . . He prays, but he hears prayer. He weeps, but he causes tears to cease. He asks where Lazarus was laid, for he was man; but he raises Lazarus, for he was God. He is sold, and very cheap, for it is only for thirty pieces of silver; but he redeems the world, and that at a great price, for the price of his own blood. As a sheep he is led to the slaughter, but he is the shepherd of , and now of the whole world also. . . He is lifted up and nailed to the tree, but by the tree of life he restores us; yea, he saves even the robber crucified with him; yea, he wrapped the visible world in darkness. . . He lays down his life, but he has power to take it again; and the veil is rent, for the mysterious doors of heaven are opened; the rocks are cleft, the dead arise.”
—Gregory of Nazianzus

This will be one I chew on for a while. I hope you do too.